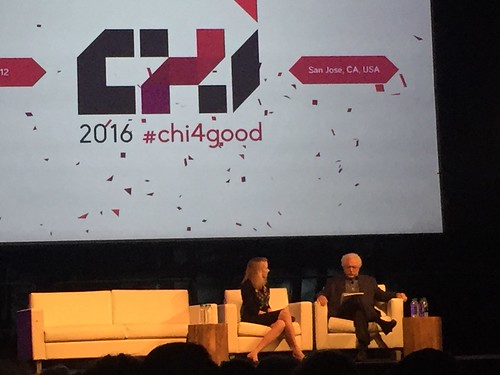 Situated in the tech mecca city of San Jose, California, CHI, the Conference for Computer Human Interaction lived up to it’s billing as the top gathering for research into digital methods and interactive methodology. This year’s conference marked its 34th year in existence, originating from a small group meeting outside of Washington, D.C. in the 1980s to a large scale global influx of computer scientists, artists, researchers, designers, musicians, writers, and scholars.

Before the conference began, I attended the “Art in the Digital World” workshop which was focused on how art and media can inform and advance the research field in electronics and computer science. We often see research or even corporate products based of of artistic work that proceeded it years ago without any mention of the artists who pioneered this practice. The workshop was a way for all of the artists to engage with each other’s work and learn more about how their practice could inform the CHI community at large.

Focusing on multiple themes such as the context of our rapidly changing planet, our evolving human / machine ecosystem, the growing global strain on natural resources and digital production, and the advancement of research methods on the potential of digital and technological infrastructures, the CHI conference integrated a wide and impressive array of international speakers, workshops, exhibitions, and paper presentations. My accepted paper was connected to the second annual digital art exhibition to take place at CHI entitled “Inter/Action: Digital Art that Responds” featuring 25 installations and/or artworks chosen through a unified jury process from over 150 total submissions.

All of the selected projects took on the theme of “art that responds”, whether that entails some kind of physical manipulation through sensor driven inputs, human touch, or environmental or other data sets, the projects were chosen to reflect our dependency and obsessive behavior towards technology and technological determinism. My work in the show was “Alerting Infrastructure” and pneumatic drill that causes damage to the physical structure of the gallery when it’s website get a visitor. The CHI context brought a new understanding of how increased network presence is affecting people daily though the constant connectivity of mobile devices and on demand access to information.

“This is Not Private” by Antonio Daniele

Other projects in the show of note included Irene Posch and Ebru Kurbak’s “Crafted Logic” that involved creating circuits out of soft materials such as fabric and conductive threads. Antonio Daniele’s “This is not private” which consists of an empathetic portrait that enables a viewer to change the portrait’s face and identity by changing their facial expressions which are then captured as emotions by computer vision software on the screen. Also Leo Kang’s “Breaking Andy Wall” allowed visitors to use cartoon mallets to smash against a framed projection surface to change the contents of the screen as a method of virtually destroying what is construed as “great art”.

“Distractions” by Anıl Çamcı picked up cell phone signals in the air around the piece which caused a speaker to vibrate wildly and thus change the perspective on a 3D portrait. Overall the pieces in the show were there to challenge accepted notions of human computer interaction and shed light on that they future might hold for these mediums.

Scholar, writer, and documentary filmmaker Dayo Olopade began the conference with her keynote address about how technology in Africa is catching up to the west, but still has a long way to go to gain traction. She pointed out that Google Maps are useless in Africa because of the lack of mapped and catalogued data on the continent and stressed the importance of maps to emerging platforms. She also pointed out how the west’s bias or preference for legibility is something that is impeding on Africa, but there is still resistance. Her example of how Apple devices are not used in Africa was an interesting point since touch screens are not suited for the climate and break too easily to be reliable there. Nokia phones thus rule Africa since they have much more durability over time. She also spoke about urbanism and how migration to urban centers is a defining factor for many people there but that most art typically disconnected from public utilities including the Internet. In order to help further this cause it is important tod design products that are sensitive to behaviors such as her example of a cellphone with two sim cards that can easily swap between networks in case one is out of range from signal. Her book, “The Bright Continent” examines development challenges in third world countries that also exist as design challenges where to truly find answers, one has to understand local context and local ability.

The second keynote was from Marissa Mayer, CEO of Yahoo and longtime Google executive in conversation with Terry Winograd, Professor at Stanford. Mayer’s experience at Google has helped her navigate how to bring Yahoo! back from economic collapse as other search engines have overtaken its once dominant stance.

Mayer explained that search is only valuable when there is a lot of data to mine. She also said that Gmail at Google shipped without a “delete” button, in order to make search more valuable to the system. Her main point was that the best strategy for a successful company and products is to support what the end user wants. Once users are happy, then it allows you to grow and adapt to what comes next. Mayer explained that with the advent of mobile phones, search has not evolved enough and that we haven’t changed, the format of search, but instead “shrunk” it down to a smaller screen or interface. She also explained that the engineering problem is not very different between building a bridge and designing a dress, the point being that each solution solves a similar problem with different materials but the reach the same outcome.

Also in a keynote session was legendary computer scientist, researcher, and inventor Alan Kay who envisioned the fist laptop or “Dynabook” at Xerox PARC in the 1970s. Kay stated that an interface should be proactive to help you learn things, rather than being reactive. He stated that anything used by humans can’t be cutting edge and that designers are happier when things go wrong because there is something to find out from it and it isn’t perfect. This point led to the discussion that innovation and invention are completely different things and that finding a balance between the two is an important design challenge. If you say that you have an “innovation team” it immediately means that the other employees of the company are “not innovative” which is not true. You have to create a mindset that everyone is innovative and that everyone has the ability to change things for the better. To create a culture of innovation, it’s important to make the tools available to enable this type of thinking. Kay stated that advancing “cultural learning” or connecting to others in physical space is the key to trying to reform education. The discussion turned into one that discussed building interfaces that “help us see better” or enable us to experience the world in a new way of discovery and innovation. Kay stated that “we want user interfaces that help us to be different than our genes want us to be.”

Overall the conference shed light on some interesting topics about how we interact and experience our daily lives with digital devices, software, and the social situations that they both enable and disengage us from. The art gallery at CHI was an attempt to bring together creative voices and visions to these complex entanglements by interjecting ironic twists and turns into the potential of human communication and experience. The demo sessions and plenary talks shed light on just how far we have come in this search for understanding, but also brought to light how far away we really are from understanding how technology is changing our outlook on the commonalities we experience daily. Hopefully through more meetings and discussions along the way, we can one to some conclusion as to whether or not technology is actually a burden or an improvement on our lives as we know them and if this can ultimately change our perspective and outlook on how to interact with media and society going forward.